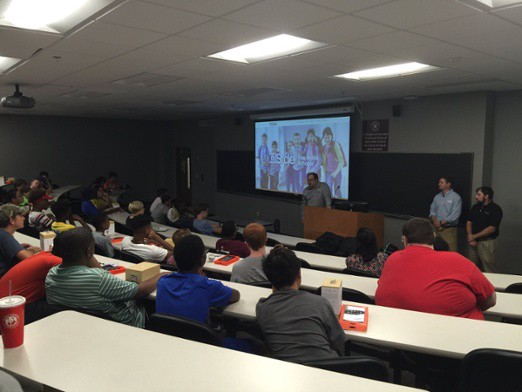 The NSA and NSF partnered with schools and universities in 37 different states this summer in an effort to increase cybersecurity awareness amongst teachers and adolescents and to address anticipated shortages in the cyber workforce. For example, in 2015, 90% of members of the Information Systems Audit and Control Association (ISACA) surveyed agreed that there was a shortage of cybersecurity professionals. This shortage of qualified cybersecurity professionals is an eminent security threat for the United States, reflected by President Obama’s February 2016 identification of cybersecurity as one of the United States’ “most important challenges.”

Dr. McKinney spent time talking with Bulldog Bytes campers and teachers about the Internet of Things, inviting listeners to contemplate where technology has been, where it is currently, and where the future will take us, emphasizing the new challenges and increased security needs as more and more people and devices connect. Robert spoke as a geographer turned techie, explaining the importance of code literacy for all kinds of jobs and his tools-based approach to programming. Justin, responsible for the security of nSide’s system, addressed system vulnerabilities and the nonstop attention needed to deter and prevent hackers. Dr. McKinney closed things off, intimating to campers that it was his experience at 12 years old in a summer computer camp that lead him down the path that currently has him positioned as CEO of a tech startup named by CIO Magazine as one of the “50 Most Promising Google Technology Solution Providers” in 2015. He encouraged campers to use technology to address problems, have big ideas, and to make the world a better and safer place.